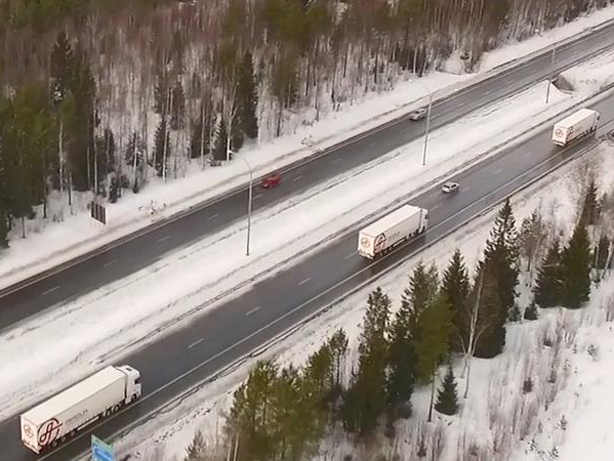 A study conducted by the University of Oulu indicates that truck convoying has positive impacts on fuel economy and on emissions.

The study demonstrated the suitability of convoying on Finnish roads and in different traffic and weather conditions. The study also showed there are road infrastructure requirements to enable convoying; for example, there is a need for areas suitable for waiting and forming convoys. The Finnish results are in line with studies conducted in other countries.

“Test drives indicated that convoying enables fuel savings, but the amount of savings was dependent on the lead driver’s driving style and the vehicle’s position in relation to the other vehicles”, explains doctoral student MA, MSc Veikko Pekkala, who acted as the trial’s investigator at the University of Oulu.

In general, drivers that participated in the study considered positively the use of driver assistance systems applied on convoying. The drivers felt that convoying facilitated their work. The using of emerging technology, easiness of convoying, and the perceived sense of safety and peer-communality were considered positive. On the negative side, drivers suspected that their job may turn into a supervision type of task.

The increase of convoying automation sets new requirements not only for infrastructure but also for regulation and work skills. More efficient deployment of convoying requires that control and monitoring systems are developed so that optimisation of route and convoying options can deliver tangible benefits.

Transport in convoys requires open and real-time sharing of freight and traffic information. This in turn requires cooperation throughout the entire transport chain so that the role of authorities is also clarified. The findings of the study indicate active research is further required to support decision-making and making the transition to take place.

“An important offset in the research and development of HGV convoying is that there is currently a notable shortage of truck drivers in Europe. Novel technology is expected to attract new employees to the sector,” states Professor Rauno Heikkilä from the University of Oulu.

“The Finnish Transport and Communications Agency Traficom supports these types of innovative trials. Our aim is to increase the knowledge on how the digitalisation and automation of HGV transport can promote more efficient and environmentally friendly transportation,” comments Eetu Pilli-Sihvola, Chief Adviser, who represented Traficom in the project Management Group.

The University of Oulu carried out the experimental study in cooperation with Scania CV Ab, Oyj Ahola Transport Abp and Oy Attracs Ab. In the experiment co-financed by the European Union, authorities were represented by the Finnish Transport and Communications Agency Traficom.

The study was the first to examine the opportunities, prerequisites and impacts of convoying in Finland. Test drives were carried out on different types of roads in Southern and Northern Finland in both summer and winter conditions.

The trial was part of the pan-Nordic NordicWay2 project funded by the European Union’s Connecting Europe Facility (www.nordicway.net).