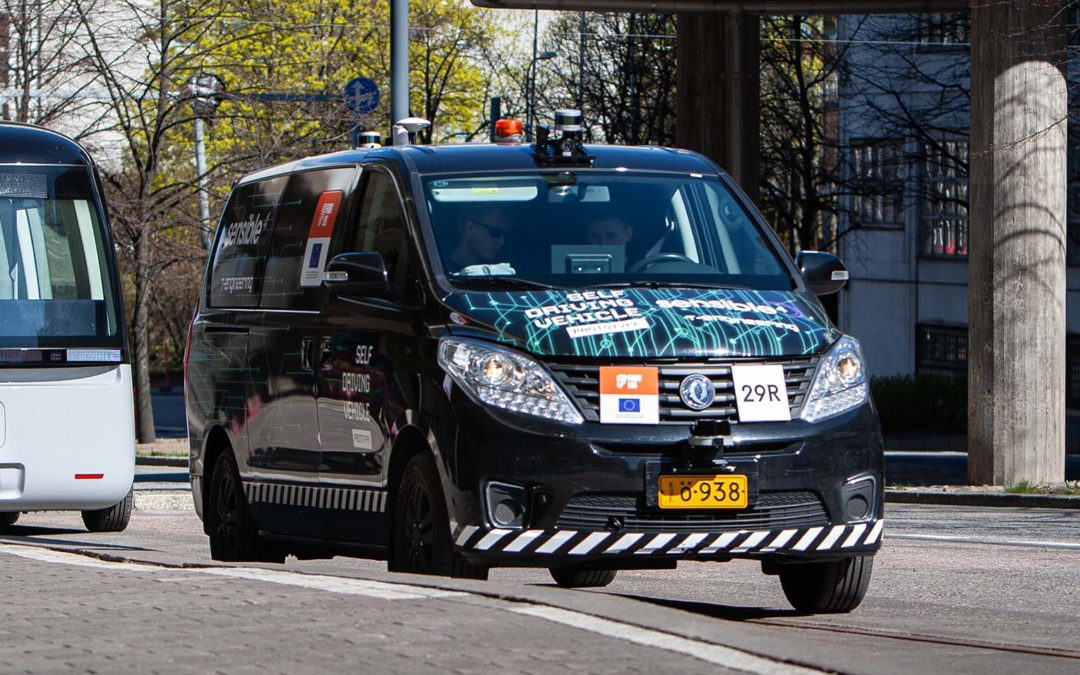 One of the autonomous vehicles in the FABULOS pilot project last spring in Helsinki’s Pasila region was an ordinary-looking minibus. The only way to tell it’s not your everyday vehicle are the markings and sensors attached to it. But what truly matters, the technology, is located inside.

Built by the Chinese manufacturer Dongfeng, the Fengxing CM7 was introduced in 2013 and usually runs on diesel. Dongfeng has invested in the southern Swedish firm T-Engineering, which specializes in engine control and engine tuning. T-Engineering was given the task to convert the Pasila minibus into an electric vehicle. The diesel engine and all its parts, such as the fuel tank and the exhaust system, were removed and replaced with electric technology.

ELECTRIC CONVERSION WITH A LOW-VOLTAGE BATTERY

What makes this electric conversion special is the battery and the engine. As a prototype of an autonomous vehicle that will never be driven fast or in hilly terrain, the power of the car is not particularly relevant. The CM7 tops out at 30 km/h, which is more than enough for an environment like Pasila where the FABULOS pilot was taking place.

Low power requirements make it possible to use a low-voltage traction battery. Typically, electric cars use high-voltage batteries, such as 400V systems. However, in this case, T-Engineering was able to use a 48V battery. A low-voltage battery simplifies the constant adjustment and installation work that a prototype car requires as there are fewer safety concerns.

The driver usually turns the steering wheel and operates the turn signals, but in an autonomous vehicle, a computer takes care of these functions. What is needed is a control system that is attached to the mechatronics and actuators required for driving and controlling a car.

So in addition to the electric powertrain, T-Engineering also installed an Electronic Control Unit (ECU) in the car. The ECU was specially developed by T-Engineering, and it offers both the drive control and diagnostics features.

SOFTWARE IS AT THE HEART OF AUTONOMOUS DRIVING

When it comes down to it, sensors are quite simple devices. The real magic lies in the computer that interprets the flow of information from the sensors and reads the commands of the Remote Control Center (RCC). The computer makes decisions on driving based on this information.

The commands are sent to the electric control unit. Control of the car is then transferred to the motors and the servos that set the vehicle in motion. The turning of the wheels and the angle of the turns are measured, and this information is returned to Sensible 4’s control systems. Steering systems also relay information to systems outside the car. The CM7’s driving can be monitored in the Remote Control Center using both maps and video feeds. Driving systems are always somewhat inaccurate which must be considered when driving the vehicle.

The cooperation between Dongfeng’s CM7 and T-Engineering is a great example of retrofitted automatization – and how Sensible 4’s technology can be installed in all kinds of vehicles.