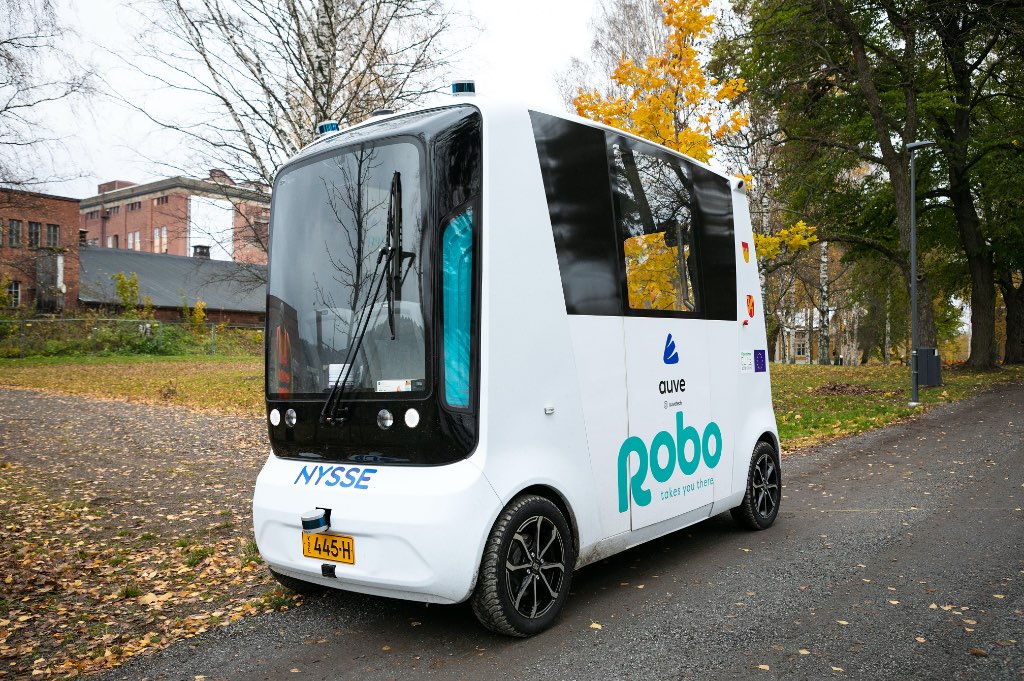 Crossing the last-mile with a self-driving bus in Tampere

This autumn, the self-driving last-mile busses provided by Finnish Roboride Ltd. have been transporting people among other traffic in Tampere around Hiedanranta and the Lielahti Manor. Customers can order a ride from this nifty vehicle with a smartphone for the “first and last kilometre” – meaning those stretches that public transport does not cover otherwise.

The self-driving vehicles travel at approximately 20 km/h and utilise several technologies for automatic driving, such as sensors, cameras and radars. With these tools, Robo takes the right way and identifies others on the road. The vehicle moves autonomously, but during the test run, there is a safety driver inside or near the vehicle. The vehicle has room for seven passengers, but due to COVID-19 restrictions, only four passengers at a time will be allowed in for the time being.

Roboride has developed its driverless transport service together with the Finnish state owned research institute VTT. Although permit processes and reports have taken some time, the authorities in Finland are positive towards automated traffic, says Matti Kutila, VTT Team Leader who participated in the project.

– The idea of self-driving vehicles is to increase the appeal of public transport and to make it possible for vulnerable groups such as children and old people to get around safely. With this new mode of transport, we expect to see a decline in the need to use private cars, which supports EU’s CO2 reduction targets. And that’s a positive outcome for the environment, says Kutila.

According to Kutila, the company’s first pilot was carried out last year at Kuparipuisto in Pori. The pilot laid the foundation for ensuring the safety and fluency of traffic in Hiedanranta. VTT was closely involved in the planning of the pilot and carrying out the risk analysis.

According to Kutila, operating a self-driving vehicle in Finland always requires a test permit, and the permits are managed by the traffic safety authority Traficom.

– They have requirements for how the risk assessment should be carried out and how the vehicle has to be technically implemented, plus they have a say on matters such as cyber security, describes Kutila.

Getting a testing permit required establishing several functional aspects, such as: how far ahead can the vehicle detect obstacles that are in front of it, what type of debugging system does the vehicle need to have, how do location services work, and what kind of challenges does the operating environment pose.

As an example, Kutila mentions a situation where there is a dark corner that makes it impossible for the vehicle’s sensor to properly see around it. Available options are to add sensors to ensure visibility or not drive the entire route.

– These are precisely the issues that VTT has been involved in solving, Kutila emphasises.

According to Kutila, monitoring a vehicle in traffic is one way of reducing risks. The person monitoring the vehicle must have a driving licence and preferably a road safety permit as well. The vehicles that are in traffic are not monitored remotely as such, but it must be possible to verify the route, and the error correction system requires a telecommunications link.

The systems in the vehicle are integrated by the manufacturer, but they always have certain limitations that need to be taken into account when planning operations.

– For example, maximum speed is limited by the resolution of the sensors that recognise objects in front of the vehicle. Another challenge with sensors is weather: you need to determine what kind of weather is suitable for using the vehicle. These issues are also included in our risk assessment discussions, says Kutila.

Tatu Nieminen, CEO of Roboride, explains that the objective of the Kuparipuisto pilot was to meet the right needs. In the pilot, visitors were transported from the gate of the industrial park to the customer.

– It’s a really complex area, so it was downright foolhardy to start operations there. There are no traffic lights or really no lanes either in the area. They have about 1,500 people working there who are walking and riding bicycles, with forklifts transporting copper reels. In addition, there is a train track that goes across the area with trains using the tracks without any fixed schedules, Nieminen describes the challenges they faced in the area.

Nieminen says that carrying out a risk assessment and planning operations was done in a fairly straightforward way in workshops. Roboride representatives, VTT experts, the vehicle manufacturers and the customer toured the area to explore it and see where potential routes could be.

The process model created in the Kuparipuisto pilot was also used to carry out the safety assessment of the Hiedanranta pilot; the report ended up being about 100 pages long. The assessment involved examining the intended route in detail, measuring signal coverage in the area, and observing the behaviour of others in the environment.

During the six-week Roboride pilot, there were no incidents or near-misses in Hiedanranta.

–    This tells us that we did our homework well and did a good job with the safety assessment, Nieminen says.

Roboride hasn’t had any problems with legislation, and working with Traficom to obtain permits has gone without any issues according to Tatu Nieminen.

– Compared to other countries, Finland is very progressive in this respect: it is easier to get a permit here than in Central Europe, for example. I can pick up the phone and have a direct conversation with the decision-making authority. You can’t do that in China, France or Germany. A small country and liberal legislation create a lot of possibilities for companies in the sector, Nieminen says.

Outside Finland, according to Nieminen, people have not really grasped how Finland’s legislation can allow things that are not possible elsewhere. Not in Europe, not outside Europe. In addition to a permissive atmosphere, Finland already has expertise related to autonomous driving.

– It makes Finland interesting to the manufacturers of these vehicles and offers Finland the opportunity to create a genuinely new industrial sector. This is the opportunity of our lifetime, says Nieminen.