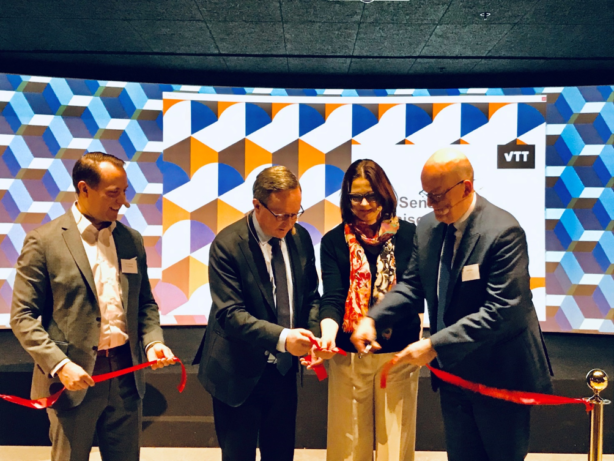 The new VTT subsidiary, VTT SenseWay, will make the expertise related to autonomous solutions available to customers. Our frontrunner position in autonomous innovations will boost the competitiveness of not only companies but of Finland as well. Minister of Economic Affairs Mika Lintilä, who participated in the opening event of VTT SenseWay in Turku, underscores the importance of artificial intelligence as driver of competitiveness.

“Finland is already a world leader in the development of autonomous ship applications. Continued success in the field requires not only investments but also collaboration between companies and research organisations. The establishment of a new high-tech company in Finland is a positive sign of faith in the future,” Minister Lintilä says.

Antti Vasara, President & CEO of VTT, says that the intention is for VTT SenseWay to operate in close collaboration with research and the business world, while creating sustainable growth and competitive advantage for customers.

“The company will provide assistance for commercialising VTT’s research findings to make it easier for companies to put results of top research into practice. We are not doing research for the sake of research but in order to solve the biggest challenges of the humankind in collaboration with our customers,” Vasara underscores.

“A world-class ecosystem related to autonomous systems has already emerged in the Turku region, and the City of Turku wants to support it in any way possible. Turku’s strength culminates in the collaboration with the various operators in the area,” Arve says.

The collaboration between companies and research organisations as the driver of competitiveness was also an issue emphasised in the comments of Mikko Valtee, Manager, Applied Research at Sandvik Mining and Rock Technology and Mika Heiskanen, Executive Board Member, Design & Engineering at Meyer Turku, who attended the opening event. Research and product development are important competitive factors for both companies.

“In the mining sector, we understood that we can no longer do things in a bigger way, but we need to do them in a smarter way. The future is autonomous and electric. Making the vision concrete requires commercial operators and agility. At Sandvik, we are always competing with innovations and product development,” Valtee says.

“Meyer Turku does not want to do the R&D of ships alone but as part of a network. The use of the most advanced technology has helped the company remain interesting and topical. We will keep on investing in automation even in the future, which will bring added value to both our customers and end users. In the future, we will also be competing with the life cycle costs of the product, in this case the ship. Energy efficiency is a significant question that can be partly addressed with autonomous solutions,” Heiskanen says.

Autonomous systems bring productivity and competitiveness to both industrial and transport-sector operators.

“Autonomous systems are developing rapidly and, therefore, we need to make investments in them right now. VTT SenseWay can operate in autonomisation projects in various sectors. Using autonomous solutions does not require replacing the old systems with something totally new. When autonomous solutions are integrated into operations or products phase by phase, the products will maintain their competitiveness on the market,” says Jere Laaksonen, Chief Executive Officer at VTT SenseWay.